After weeks of the river being so low finally in the past couple of weeks saw some fresh water in the river!
A week or so ago I fished the river after a days persistent rain and it was high and coloured. Despite this the fish were still actively rising and feeding off the surface.

This week we have had some rain but not much. I took a trip to the river this last Sunday to be greeted with a nice flow and fish everywhere and a blowing gale! I set up with a beaded nymph on the point and a klinkhammer dry on the top dropper.

The wind made casting difficult at times but after a few casts I landed the first fish of the afternoon! A typical Calder grayling. The first of many!

The afternoon brought heavy outbreaks of rain and strong winds. However the cooler water in the river really made a difference and the fishing really turned on, Missing numerous fish! 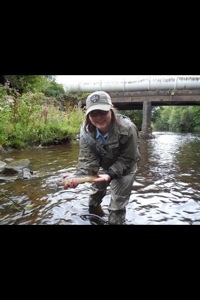 The best fish of the day was the trout pictured above which as soon as I hooked into the fish it was hugging the bottom of the river. A quick picture and the trout was returned safely!

I moved to just below the bridge where I was fishing to where there are a few big trout which sit under a tree awaiting food coming towards them. I had previously caught one of them that fell to a tiny nymph but today I stood and watched this particular trout for around 10 minutes. Not one of the bigger ones but it was actively feeding. I flicked the klinkhammer just upstream of where the fish was rising. And watched on as I saw the brownie rise towards my fly. I struck up and hooked the brownie!

The heavens opened and I decided to call it a day! Next weekend will see two days at stocks reservoir sunday fishing with my dad and bank holiday Monday with Lisa! I best get tying those flies!